Board of Trustees Hamburgische Regenbogenstiftung. 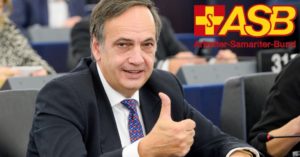 Austria congratulated Albania for the reforms, especially as regards the judiciary and the fight against corruption.

Austria congratulated Albania for the reforms, especially as regards the judiciary and the fight against corruption.

Austrian Justice Minister, Josef Moser, valued Albania’s progress with the judiciary reform, and said that it is creating the right premises for Albania to become a full EU member. The member countries must promote the good results of the reforms undertaken by Albania, according to Moser.

Two other high-level Austrian officials praised Albania’s achievements with the judiciary Georg Stawa, Head of Department for strategy, consulting and information-management in the Austrian Ministry of Constitutional Affairs, Reforms, Deregulation and Justice.

European Chamber: Albania Among the Worst in Europe for Business

The European Chamber (EuCham) ranked Albania among the five worst countries in Europe for business in its “Best European Countries for Business 2019” report. Albania ranked 42nd out of 46 countries included in the research. It scored 53 points on a 100 point scale, equal to Russia’s score. Only Azerbaijan (52), Bosnia…