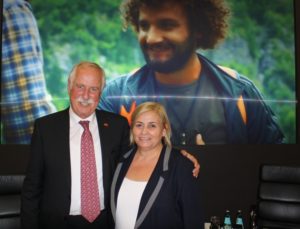 The picturesque village of Lin situated on Lake Ohrid, near Pogradec is covered in rubbish despite its protected UNESCO status.Due to lacking basic services in the area such as rubbish collection, hundreds of homes and dozens of hotels and businesses in the area are left with no way to dispose of their rubbish, meaning it remains on the streets causing a public health risk as well as being unsightly.The area, popular with tourists, used to be serviced by a weekly rubbish collection, but during August the Pogradec Municipality only collected waste every 10 to 15 days.

Residents, and tourists have voiced their concerns on the bags of rubbish that are left festering by the side of the road, in high temperatures for weeks at a time.

The problem begins at the entrance to the village and spreads through alleyways and paths that are promoted for hiking in the area.

In early July, UNESCO expanded Lake Ohrid’s protected territory to include the Lin peninsula. The North Macedonian side of the lake has been included in the UNESCO World Heritage List since 1979, whereas Pogradec and the surrounding area, they have been grappling with pollution and unplanned urban development.

However, Lin has distinguished itself for its rare cultural values. On the peninsula are foundations and mosaics of a 6th-century Paleo-Christian basilica as well as there being evidence of early prehistoric dwellings on the shores of the lake.

For these reasons Lin was included in the UNESCO catchment area. But despite receiving this rating, the Municipality of Pogradec has done little to increase the way that they take care of the area.

A month ago, Prime Minister Rama inaugurated a guesthouse in Lin further publicizing the project of ‘100 Villages’ and the new mayor, Ilir Xhakolli, who ran uncontested in the 30 June ‘elections’.

“We will make some interventions to turn this village into a successful model of transformation in the years that the new mandate begins with the new mayor. I believe we have a great ally here – the wonderful nature and rich heritage – and we need to join forces. On one hand you to make more inns and on the other we with financial support.”

The change promised by the Prime Minister could begin with the administration of the garbage collection service, but it appears that in the month since he made his promise, even this was too much to ask for.