Diplomat Zef Mazi: Borchard’s behavior is outrageous, he must be urgently removed from Albania

Zef Mazi is a renowned diplomat of the transition period. He has been for many years the Head of Mission (Ambassador) of Albania to the OSCE and to the UN, to the United Kingdom, and the Republic of Ireland.

He has served for several years in the OSCE Secretariat and for the past seven years has served as Special Assistant for Strategy to the Director General of the International Atomic Energy Agency. Speaking to the deputy editor-in-chief of Dita newspaper, ErionHabilaj, MrMazi comments on Sunday’s incident with the OSCE ambassador in Tirana. The seemingly banal event has sparked much public debate.

“So far the Borchard gesture has not been seen and heard of anywhere else where there are OSCE missions on the ground! That’s scandalous, „Mazi says.

Below is the full interview published today in Dita newspaper.
We have seen during these 24 hours revolts that might not be considered minor and many writings have been published against the gesture of Borchard, Head of the OSCE Presence in Albania, to the people in protest. As a veteran of the OSCE / OSCE, what would be your comment?

I am glad you refer to him as his title: Chairman of the OSCE Presence in Albania. In an article in your newspaper two weeks ago I explained that the OSCE does not appoint ambassadors, therefore, there are no ambassadors in any country. It has no legal personality, and appoints a head of mission or presence. He could be the ambassador of Germany if, for example, Germany decides to appoint him somewhere, but not the OSCE.

So far, Borchard’s gesture has not been seen and heard of in no other place where there are OSCE missions on the ground! This is scandalous! He must urgently be expelled from our country as a „non-grata“ person, or urgently required to resign himself, setting a clear deadline for action. In the meantime, the Secretary-General of the OSCE must be urgently informed of his shameful gesture and of the unequivocal action,Albania must fear not expel  him from our country. Pressures might come from some country, but Albania should not give in to the pressures. 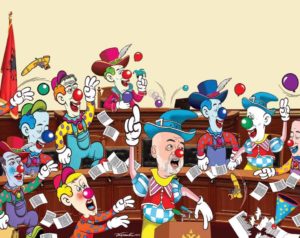