Queried about rampant illegal construction, PM Rama claimed to have signed an agreement for the transfer of an illegally built space to government ownership but – responding to a BIRN FOIA – his office now says it doesn’t have the document, after all. 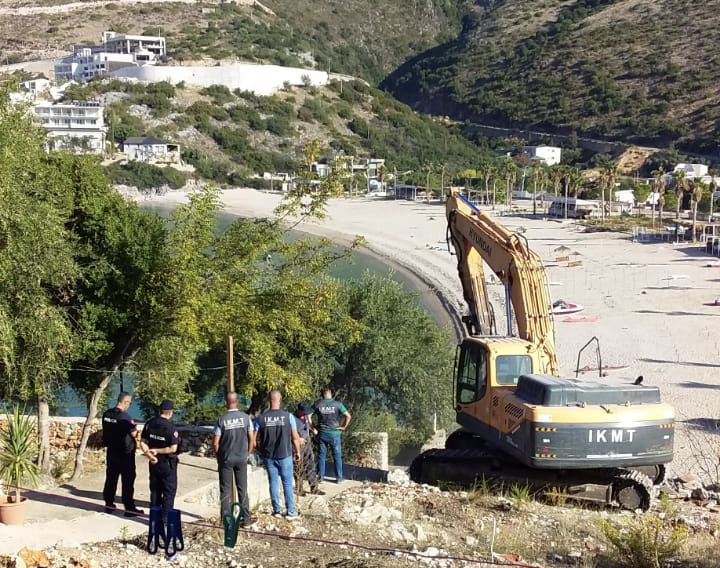 Photo: Territorial Protection Inspectorate demolishing an illegal construction on Jale beach in south Albania.
Authorities are demolishing more and more illegal builds in a bid to save Albania’s threatened coastline – but an epidemic of wildcat construction continues.

On 5 October this year, employees of the National Inspectorate for the Protection of the Territory, the IKMT, used heavy machinery to demolish an illegal building belonging to the Balaj family. Police officers stood by to intervene in case of trouble.

“This is illegal; I already demolished your object three years ago,” Fatmir Meta, the inspector, told one of the brothers Balaj. “Within two years, you have twice built illegally,” he added, in an encounter recorded by TV cameras.

Albanian Prime Minister Edi Rama months is getting tough with illegal builds. Earlier this year he announced an operation codenamed “Our Coastline”, aiming to remove all such illegal constructions damaging the coastline, and punish those responsible.

This is not the first time that PM Rama, or his predecessors, declared war on the “wildcat” construction that is a widespread phenomenon across the country.

But the success of this latest campaign is doubtful at best.

Data obtained by BIRN through Freedom of Information requests, FoI, show that the in the southern Vlora region during the last three years, several hundred illegal construction were demolished and the number of prosecutions for breaking the law increased.

However, prison sentences are almost invariable commuted and fines are rarely paid. Moreover, illegal constructions are not the only problem in the field. Others relate to property registration and lack of urban planning for these areas.

The Balaj family, who have lived in Jal village since 1989, told BIRN that IKMT’s demolition was illegal and the destruction of their property had left them ruined.

“They killed our future and our means of living,” Artan Balaj, a member of the family, told BIRN. “In one day, we all ended up down and out,” he added.

A major problem for over 30 years

Unauthorised construction has been one of the most acute issues facing Albania for the last three decades, ever since internal passport requirements were lifted in 1991, when the the Communist regime that imposed them collapsed.

Almost one-third of the population moved, usually from rural mountainous areas to the western lowlands, settling in the towns or along the coast, where life is easier due to possibilities in tourism, fishing and construction.

The National Cadastre Agency has counted some 320,000 illegal units, some 200,000 of which were legalized by 2000. But the process of legalizing them remains mired in controversy and political struggle.

An audio recording published during the last election campaign showed Artan Lame, a supporter of Rama’s ruling Socialist Party, and head of the agency dealing with legalization processes, acknowledging that some 100,000 units cannot be legalized while their application status is held pending – but adding that the owners were being left at dark about this, because otherwise they might not support the government and become cannon fodder for the opposition.

Among these units are illegal constructions situated in coastal areas, whose number is increasing year by year.

KMT figures show that 43.1 per cent of all buildings destroyed as illegal in all of Albania from 2017 to 2020, were in Vlora.

However, sentences are mild and many lawbreakers are back in business soon after the demolition.

Some of the buildings previously destroyed as illegal on the coastline in Vlora bay were soon repaired and returned to business for the touristic session. Some had been adapted as temporary buildings, offering various services last summer.

Albania’s parliament made “Illegal Construction” a penal offence back in 2008, following a wave of illegal construction, aiming to stop to the phenomenon while starting a legalization process for those already built. I