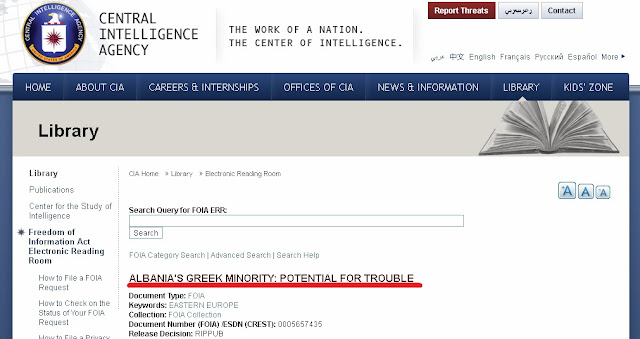 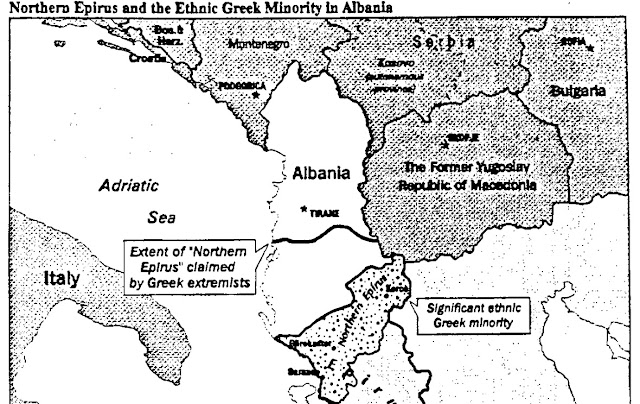 Relations between Albania and Greece have deteriorated sharply
following a violent border attack in April, the latest incident in three years of strained bilateral ties. Greece has stepped up accusations of Albanian „repression“of its ethnic-Greek minority, while Tirana fears Athens has designs on the Greek. Greek allegations that Tirana is systematically violating the rights of the ethnic-Greek minority with the aim of driving it out of Albania appear to lack

CIA has published for the first time secret documents, for the situation of the Greek minority in Albania, in 1994. From the beginning, the report made by the experts of the CIA, has estimated that the Greek community in Albania, initially, seem silent, but great potential, which could create upheaval and instability in Albania.

In the report are reflected punishment 5 members of „Omonia“ (the Greek Politic Organization), the High Court was decided to release them as a result of the intervention of the US government, the massive return of hundreds of thousands of Albanian refugees from Greece, expelled the Greek government since former president Berisha collaboration with the secret service NIS, had objection to punish  the Greek Minority Leaders, as a series of evidence about the bad condition of the Greeks living in Albania.

The report states that the situation is alarming and properties as Greek community and even the Orthodox Church, were still held by the Albanian government,while against the Archbishop orthodox Anastas, was created an large Albanian nationalist front.

The report gives us a special chapter for the Northern Epirus and Greek territorial claims, which are based on certain international conventions that Albania, there has never ratified.