Ioannis Michaletos 10 Dec 2011 In the following exclusive investigative report, the acclaimed journalist from Tirana-Albania, Gjergj Thanasi outlines the serious security issues relating to the Albanian biometric passport system and the links with international organized crime and terrorist rings and with the Iranian intelligence establishment especially. The Problematic Albanian Biometric Passports and the Links to International Terrorist Rings By Gjergj Thanasi

The equipment of the Albanians with biometric identity cards and passports was a must in order to have Albanians travelling in European Union countries without visa restriction. The removal of travel restriction was a kind of an European  gift to Albanians on the eve of Christmas  2010.Such passports are highly reliable and a tough barrier to criminals and terrorists penetrating Europe under false names. The system is really false proof. The only way to evade the system is to collude with the Albanian authorities issuing the passports, thus stealing the identity of somebody else.

Unfortunately this is precisely what happened in Albania. Almost from the very beginning Albanian emigration police as well as several European border police controls  detected individuals equipped with regular Albanian biometric passports having ‘borrowed” the identity of somebody else. Judging by the covering of the Albanian media such falsified biometric passports are almost a daily occurrence.

The bearers of falsified Albanian passports range from ethnic Albanians citizens of the Republic of Kosova(they still need a visa to travel to Europe), to Albanians being under expulsion or travel bans in European countries. The new identity help them to travel and stay in Europe up to 90 days in succession without any difficulty. There are cases when even convicted criminals, or wanted individuals (Albanian citizens) are equipped with a biometric passport with a new identity, thus evading justice and facilitating their criminal activity in Europe as well as in Albania. Only  casual finger prints checks by one or another European law enforcing agency has resulted in pin pointing  individuals with a criminal record or even  wanted persons having a new identity. Albanian media like the newspaper Investigimi (an article by Durim Sula) and Durres Bulevard(an article by Dr. Idriz Tafa) have also made public of evidence that terrorists from Yemen and elements of Iranian Revolutionary Guard, the so called Quds Force are in possession of  Albanian biometric passports with typical Albanian names and surnames.

Mr. Armand Teliti the Director General of the Albanian General Register Office during a session of the security sub comity of the Albanian Parliament answering the questions of MP Gazmend Oketa  (wright wing) and MP Gamir Bizhga (left wing) admitted that Albanian authorities have detected over 500 cases of biometric passports issued to persons with a “borrowed”  identity. The Albanian media has directly accused Mr. Teliti of being part of the system issuing such problematic passports .Up to now  only the bearers of such passports have been detained by the emigration police. In a couple of cases the civil servants of remote villages register offices and employees of Aleat-Safran concessionary company have also been arrested. Such cases are under trial or have received short term prison sentences as well as fines according to Albania law.

It is obvious, in this case top civil servants ended in prison only for funds embezzlement, while now we have serious allegation of collusion with terrorists and yet only small fry is facing justice.

Defense & Foreign Affairs Daily | Mar.17,2004 | Gregory R. Copley,
Editor,
Defense & Foreign Affairs Daily
Volume XXII, No. 50 Friday, March 19, 2004
© 2004, Global Information System, ISSA
Exclusive Special Report
During the first half of August 2003, 300 Albanian-trained guerillas  including appr. 10 mujahedin (non-Balkan Muslims)  were
infiltrated across the Albanian border into Kosovo, where many have subsequently been seen in the company (and homes) of members of the
so-called Kosovo Protection Corps which was created out of Kosovo Albanian elements originally part of the KLA. In fact, the Kosovo
Protection Force seems almost synonymous with the Albanian National Army (ANA), the new designation for the KLA. The guerillas were
trained in three camps inside the Albanian border at the towns of Bajram Curi, Tropoja and Kuks, where the camps have been in operation
since 1997.
.
http://www.freerepublic.com/focus/f-news/1100906/posts 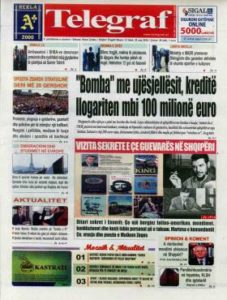